DAN SWEZEY PH.D
Outreach
I am committed to collaborating with community and industry stakeholders and to sharing my scientific expertise with the public.  Working as an aquaculture researcher and educator is both a privilege and challenge in that the production of food from the sea encompasses a broad set of controversies and belief systems, which naturally lend to challenging dialogue.  Through my work and outreach, I'm strive to clearly communicate science in an accessible and open format, informing the debate on aquaculture and the environmental issues of our day to enable a clearer understanding of our changing planet and the role that science and food from the sea can play in our every day lives.
Collaborations with indigenous community

Visiting the Kashia Coastal Reserve in Northern California with leaders from the tribe to discuss locations for a proposed abalone farm.
In 2015, the Kashia Band of Pomo Indians of the Stewarts Point Rancheria, a tribe of indigenous peoples from Northern California re-acquired 678 acres of ancestral land located on the northern coast of Sonoma County, CA representing a small fraction of the coastal territory originally inhabited by the tribe pre-colonization.  Of highest cultural significance, harvests of the red abalone (Haliotis rufescens) served as a staple food for the Kashia and other Native American groups for thousands of years along this region of coast and formed the foundation of many tribal cultural traditions.

I currently sit on the leadership board for the development of a new aquaculture facility led by the Kashia to produce red abalone for both food and wild restoration, honoring the tribes legacy as ancient stewards of the north coast.   As a science-liaison and leadership voice on the project, I am contributing to a business plan for this facility and am also involved in the formation of a conservation research non-profit, aimed at informing the public about the natural history of abalone, ongoing conservation efforts pursued by the tribe, and the historical relationship of native peoples to abalone in California.
International outreach and engagement 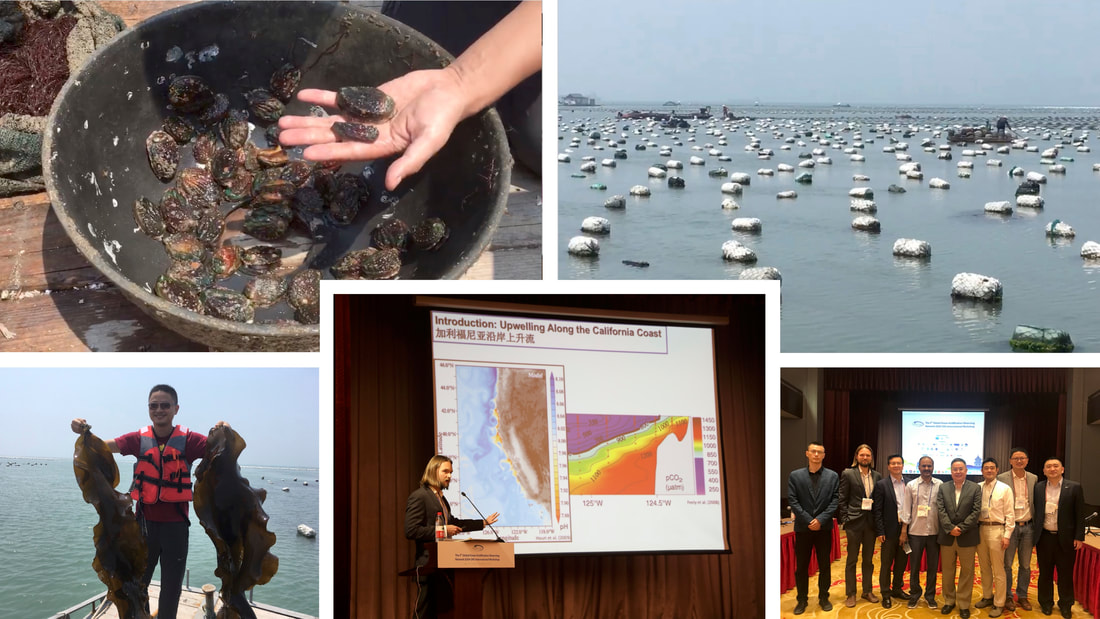 Top L to R: A pot of asian abalone (Haliotis discus hannai) being cultured in floating baskets outside of Quanzhou China, a family owned ocean plot for the farming of abalone being tended in the Strait of Taiwan.
​Bottom L to R: Professor Weiwei Youg of Xiamen University holds up two line cultured fronds of kelp (Saccharina japonica), myself speaking on ocean acidification impacts to shellfish aquaculture in Hangzhou China, a panel of Chinese aquaculture industry officials and researchers gathered to discuss adaptation options for aquaculture under changing ocean conditions.
In 2019, I was fortunate to travel to China to present my work as an invited speaker in Hangzhou, China at the meeting of the Ocean Acidification Observing Network.  As part of my visit, I spoke on industry-science responses to multi-stressor impacts in aquaculture.  Through this experience, including a guest lecture at Xiamen University, I was lucky to establish relationships with colleagues in the Chinese aquaculture industry and tour several kelp and abalone (or "Bàoyú" in Mandarin) farms in Fujian province, Southern China.  Coming from a western perspective, the experience was eye opening to see how different cultures interact with food from sea and how aquaculture (which started in China more than 5000 years ago) has grown to support the nations expanding population.  I am committed to furthering international collaborations with aquaculture researchers and practitioners to build a global dialogue around ocean sustainability and food from the sea in support of the many global communities dependent upon these resources.

L to R: Sun drying commercially harvested Kombu (Laminaria setchellii) with Intertidal Seaweed Co., discussing abalone grow out approaches with general manager Doug Bush at The Cultured Abalone Farm.
In 2015, I was hired by The Cultured Abalone Farm LLC. (TCAF) to initiate a research program on behalf of the company focused on the mitigation of climate change impacts to the production of California red abalone.  This work has grown to encompass work on white and green abalone conservation, formulated feed development and other areas of ongoing collaboration.  Through this work, I've developed important connections with broader shellfish aquaculture in California, including the development of proposals with with Hog Island Oyster Company, one of the Bay Areas most recognized oyster producers and culinary brands.  I am also leading California Sea Grant funded research to pioneer new seaweed propagation techniques in collaboration with Intertidal Seaweed Co., a private commercial business based in Northern California.  Outreach with these groups is a major component of my work, providing science support to California’s aquaculture industries.  As an example, I am currently serving as a science contributor to California Aquaculture Action Plan, contributing science and policy perspectives to this OPC led effort seeking to inform the states priorities for aquaculture research and development over the coming decades.
Communicating science to public officials and the media
L to R: PBS camera crew filming abalone in grow out racks at The Cultured Abalone Farm, the final documentary as part of the "Earth Focus" series.
In 2019, I was invited to participate in a PBS documentary focused on my collaborative work with industry and academic scientists to conserve abalone and kelp forests in California.  As a scientific communicator, I believe it's essential to honestly and openly dialogue with the public on challenging environmental topics in order to educate and help inform popular debate.  I've been fortunate to have opportunities to communicate my work to public officials and to the general public through television, radio and print mediums.  I'm committed to continuing these engagements in my ongoing work.  Click below for examples: 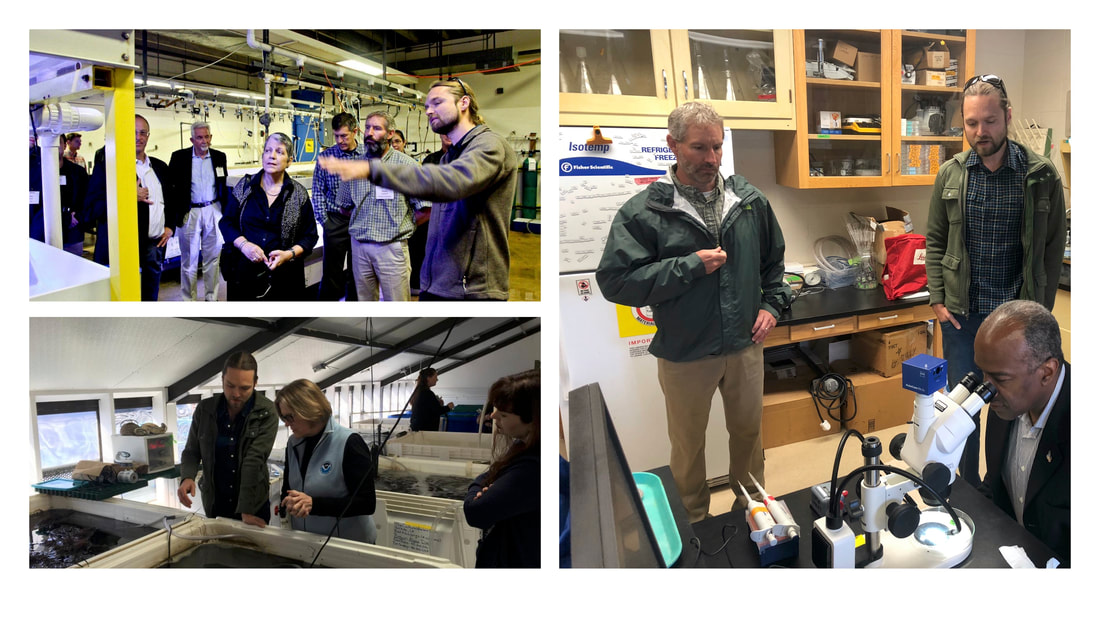